Shorewall or, more precisely, Shoreline Firewall is a firewall configuration tool. Technically, it is a Netfilter (iptables/ipchains) kernel subsystem add-on that implements simplified configuration methods. It provides a higher level of abstraction for firewall rules description.

In Calculate Linux Desktop and Calculate Directory Server, Shorewall is included in the basic distribution. On other Calculate flavours, you have to install it:

To include examples and documentation, install the package with the doc USE on:

To get more firewall functionality, try these:

To install them, run:

Shorewall is not a daemon, i.e. it does not operate continuously. The rules are stored in text files. When shorewall starts, it reads its configuration files and converts them into settings that ipchains/iptables can understand, after which these firewall settings take effect until the operating system restarts.

The order in which zones are described is important because it is in this order that iptables chains will be called to check for packets forwarded from one zone to another. In other words, a packet addressed to the firewall is first checked for , and then for loc. Now, if you describe ~loc~ chains. This problem can be solved by specifying the "phone" zone as a subzone of ("phone:loc ipv4").

Here is a configuration example for two network cards:

To learn more about how to edit this file, type man shorewall-zones.

Linking the interface to a specific zone

To assign the interface to a zone, edit the /etc/shorewall/interfaces file. You can also define in this file which filters to use when processing incoming packets.

To assign an interface to a certain zone, you must specify the name of this zone (ZONE), the interface name (INTERFACE), the broadcast address (BROADCAST) ("detect" is the recommended value), and, if necessary, list the filters (OPTIONS).

Here is an example with two network cards.

In the file, specify that ~ is for Internet access (), while ~ stands for the local network (). The filters for incoming traffic are tcpflags, routefilter, nosmurfs, logmartians.

To learn more about how to edit this file, type man shorewall-interfaces.

Linking IPs to a specific zone

To link IP addresses or subnets to the zone, edit the /etc/shorewall/hosts file. To assign hosts/subnetworks to a zone, you must provide a zone name (ZONE) and a network interface with its subnet or IP addresses (HOST).

This is an example of a "vpn" zone definition. The current gateway sets up a tunnel with another gateway that is connected to segment ~10.0.0.0/24~.

To learn more about how to edit this file, type man shorewall-hosts.

The default action, or policy applied to traffic between each source zone and destination zone is specified in the /etc/shorewall/policy file. A rule is described as follows: source zone (SOURCE), destination zone (DEST), default rule (POLICY) (DROP, ACCEPT, REJECT) and, if necessary, the logging level (e.g. info).

The policy considers packets that create new connections. * RELATED / ESTABLISHED * packets (packets of the established connection) are skipped by default.

For an example, set the following policies:

To learn more about how to edit this file, type man shorewall-policy.

IP masquerading is a method of remapping one IP address space into another by substituting the sender's address dynamically, depending on the address assigned to the interface.

The Dynamic NAT (Masquerading) and Source NAT (SNAT) are define in в /etc/shorewall/snat.

If necessary, you can exclude NAT when sending packets to specific subnets, for example, for ipsec tunnelling.

To learn more about how to edit this file, type man shorewall-masq.

You need to define rules that describe exceptions to policies applied to traffic. Those are contained in the /etc/shorewall/rules file.

This file contains three sections: RELATED, ESTABLISHED, NEW, which stand for three connection statuses. Status conditions are defined by the conntrack criterium, that can classify packets depending on how they relate to connections. The NEW status allows to select only packets that open new connections, the ESTABLISHED status stands for packets belonging to the established connections, and the RELATED status corresponds to packets that open new connections that are logically related to the ones already established (for example, data connection in passive FTP mode). The INVALID status means that it is impossible to determine the connection the packet belongs to (INVALID is also included in the NEW section). As explained earlier, the policy describes the behavior for the NEW section, while ACCEPT is applied by default to the RELATED and ESTABLISHED sections.

The following examples are written to the NEW section.

If this rule must be also applied to the packets sent from LAN to the external IP of the gateway, edit the "masq" and "interfaces" files.
In "interfaces", add the routeback option for ~, allowing the router to send packets from one local network to another.

For example, to enable remote replication for unix, samba, and mail services to the Calculate Directory Server:

In the 80 port example, a macro is used, which is a rule(s) template. The sample macros are stored in / usr / share / shorewall and called macro.macroname. HTTP macro contents

According to the contents of the macro, using it is equivalent to:

The sender and receiver of the packet can be defined as follows.

To learn more about how to edit this file, type man shorewall-rules.

In order for Shorewall not to reset encrypted traffic, the tunnel must be described in /etc/shorewall/tunnels . This file describes the rules for passing encapsulated (usually encrypted) traffic between Shorewall and a remote gateway.

The description contains the type of tunnel (TYPE), the original zone (ZONE) and the address of the remote gateway (GATEWAY).

To learn more about how to edit this file, type man shorewall-tunnels.

In order for Shorewall to start when the gateway is started, run:

The queue organization (queue) determines how the data is sent. It is important to understand that only the transmission rate of the data being sent can be managed.

As the Internet appears now, we cannot control the amount of incoming traffic. This is somewhat like a letterbox installed on the inside of your door: you cannot choose how much mail you get, unless perhaps you speak to everyone who writes to you.

However, the Internet mostly operates based on the TCP/IP protocol, which has a few useful features. TCP/IP ignores the network bandwidth between two hosts, so it sends data faster and faster (this is called "slow start"). In case of overload, packets are being lost and the connection becoming sluggish. (It is a bit more complicated - and smarter that than, as we shall explain later.)

Queue processing disciplines define the way data is transmitted. Disciplines can be "classless" or "classful".
They generally receive data, reorder, delay, or destroy it. Classful disciplines allow to use classes for a specific type of traffic. Therefore, there is a root discipline for the given interface that is either classful or classless. A classful discipline, in its turn, contains several classes that allow you to manage traffic.

To manage traffic, it is necessary to define the root discipline applied to the device.

Incoming traffic is fed into the incoming discipline, which can contain a number of filters to process packets. Those can thus be discarded, lost, filtered. This is called policing.
It happens pretty early in time, before the packet is forwarded for further processing, in order to decrease the CPU usage.

Once in a queue, the packet waits for the kernel to pass it on to the network interface. This is called "fetching from the queue".

Enable traffic management on an interface

This file describes the channel width for the interface on which you want to use bandwidth management. The channel width can be measured in kbps, mbps, kbit, mbit and bps.

IN-BANDWIDTH defines the bandwidth of the incoming signal for the interface. Keep in mind that you cannot manage incoming traffic, because it has already been received. What you can do is limit the allowed traffic. Then packets that exceed this value will be dumped. If you do not want to dump, set value to 0 or -.

OUT-BANDWIDTH defines the bandwidth of the outgoing signal for the interface. This maximum speed is used as "full" when classifying traffic. The incoming traffic that exceeds this value will be dumped.

If Shorewall is installed on a gateway on which it is important to manage transit traffic, then for both interfaces it is necessary not to specify incoming traffic, since there may be problems later when managing bandwidth.

Here is how to set a channel of at the gateway (incoming traffic from the Internet is managed as outcoming to the local network):

To learn more about how to edit this file, type man shorewall-tcdevices.

Classes are define in /etc/shorewall/tcclasses. Each line defines a traffic class, namely: the INTERFACE for which the class is being created, the MARK to define the class trafic belongs to, the guaranteed traffic RATE, the desired throughput (CEIL), the PRIORITY and additional OPTIONS.

The marker will be used when setting the rules (tcrules) for traffic belonging to a specific class. The guaranteed and desired bandwidth can be specified as an absolute value or compared to the total bandwidth provided for the interface (e.g. 2*full/3, two thirds of the channel). _ Guaranteed bandwidth_ means that at peak loads this type of traffic will have at least the specified bandwidth, desired bandwidth means that bandwidth for this type of traffic will not exceed the specified value. The lower the priority value, the higher the priority for traffic. Traffic with lower priority will not be processed until traffic with higher priority has been processed Additional parameters are comma-separated and can take the following values:

For an example of classification, see below:

To learn more about how to edit this file, type man shorewall-tcclasses.

Traffic marking can be configured by editing /etc/shorewall/mangle. Thanks to marking, the entries in this file determine the class the packet belongs to. The fields defining the marked conditions are as follows:

The mark is defined as follows:

To learn more about how to edit this file, type man shorewall-tcrules.

Imagine that below is your network:

First define the necessary zones: 'net' for the Internet, 'loc' for the local network, 'fw' for CDS:

Describe the default rules (or policies) for traffic passing through the gateway: local network (~loc) allowed access to all zones, packets from the Internet () are dumped, the REJECT rule is applied to all other packets and the whole process is logged:

Add masquerading for packets coming from the local network to the Internet:

The gateway providing Internet access to the local network is ready to use. Now add some rules:

Declare a new zone. It must be declared before :

Assign phones from the zone to :

Ping the SIP and IAX ports at :

Modify the network of the previous example according to the diagram (adding a remote subnet): 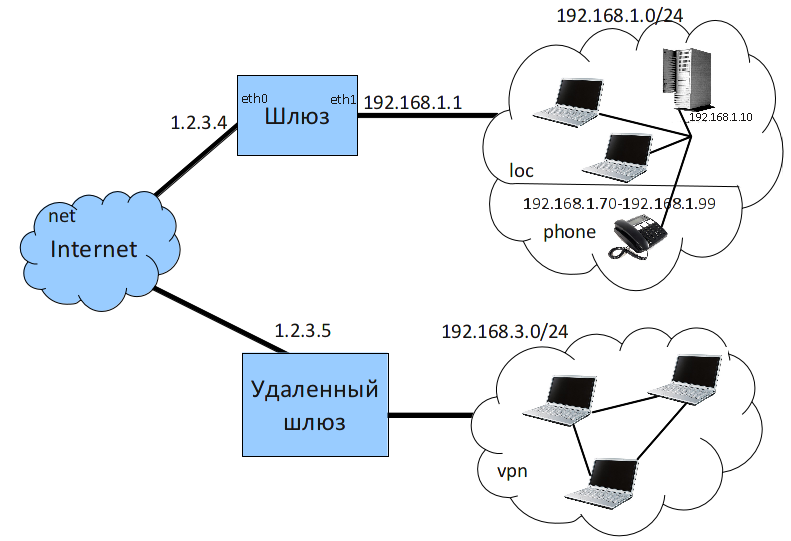 Add the "vpn" zone for the remote subnet:

Describe the tunnel: ipsec, the tunnel goes via the ~ zone, the IP address of the remote gateway is as follows:

Disable masquerading for packets sent from the local network () to the remote subnet ():

Describe the policy to allow "vpn" connection to the local zone:

You have a 5 Mbit channel that you want to split as follows:

Set the width of the incoming and of the outgoing channels:

Define traffic classes. Since handles the Internet connection, it must be referred to for all outcoming traffic, while is used for local connections and, therefore, all incoming traffic relates to it.

Define the rules for the traffic to be assigned to a particular class:

There is something special in this configuration: since all classes are directly subordinated to the root discipline, RDP and http (for instance) together may take the entire channel. If you do not want the channel allocated for sip traffic to deal with other traffic, use a hierarchical structure similar to this one: 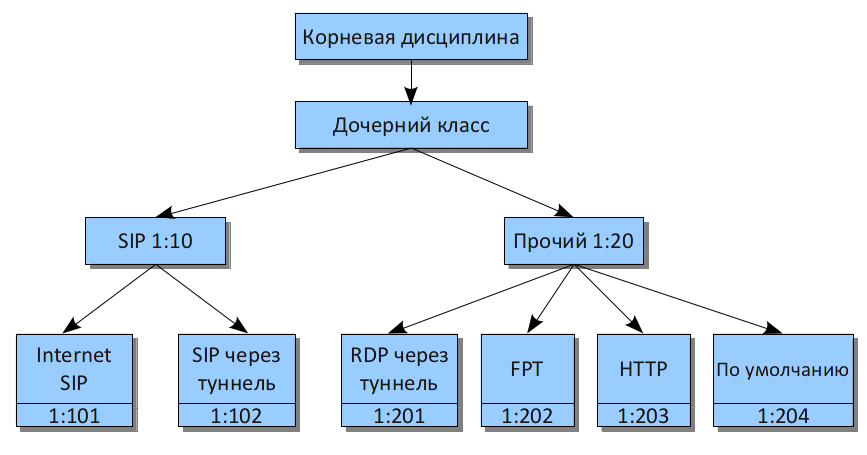 In use this classification, you have to specify the "classify" option for each interface:

Let's modify the traffic classes according to the structure presented above:

Redefine the rules for traffic to be assigned to a class: